Even though uterine fibroids can affect up to 80% of women by the age of 50, they are generally benign and asymptomatic. Many women are not even aware that they have fibroids. However when uterine fibroids grow large enough, they can cause symptoms which run the range from simply annoying to negatively impacting quality of life. Often, the type and severity of the symptom depends on the size and type of fibroid, determined by where in the uterus they are located. If you are experiencing any of the symptoms below, uterine fibroids may be the cause.

This is a symptom which is most common with submucosal fibroids, which grow on the interior of the uterus, and the intramural fibroids which grow imbedded in the muscular uterine wall. Women who suffer heavy periods know how trying annoying that time of month can be. At its extreme, this symptom can drastically impact someone’s quality of life.

Beyond the practical considerations involved in the management of a heavy flow and passage of clots, long term heavy bleeding can lead to anemia related exhaustion and other difficulties. Fibroids can also be a factor if you have painful periods, as intramural fibroids can make cramps much more intense by interfering with the proper function of the uterine muscle.

Bloating, Fullness, or Pain in the Pelvic Area

Even though usually benign, a uterine fibroid is essentially a tumor-like overgrowth of abnormal tissue. It is little wonder then that having fibroids in and on your uterus can cause symptoms such as a feeling of fullness or bloating. Submucosal fibroids in particular can give a feeling of heaviness in the uterus. Fibroids can also cause generalized pain as they take up space meant for your uterus or other organs. Acute pain is rare, but can happen if a fibroid outgrows its blood supply or significantly impedes the proper function of other organs. 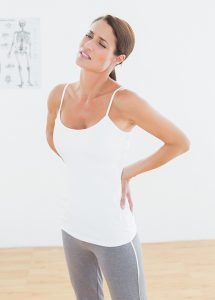 Back and Leg Pain

Back and leg pain is most common with Subserosal uterine fibroids, which grow on the outside of the uterus. If the fibroid is located on the back of the uterus, it is very close to the spinal column. If it becomes large enough it can press on or pinch the nerves in that area, causing lower back pain. It can also cause sciatica as the fibroid presses against the sciatic nerve and sends pain down the back of the legs.

Urinary incontinence is sometimes a sensitive subject, but have you considered that there may be factors at work beyond a lack of bladder control? If a uterine fibroid grows on the top of the uterus, it shares pelvic space with the bladder. This restricts the size available to the bladder, causing the need to go more often as well as contributing to urinary incontinence. At its worst, obstruction of the bladder and urinary tract can also lead to urinary tract infections (UTIs) and blood in the urine. Similarly, if the fibroid is located near the colon, it can obstruct normal bowel movement and lead to constipation as well as painful passage of stools. If you are experiencing frequent UTIs, constipation, or discover blood in your urine or stools, promptly seek medical care.

There are many reasons a woman might experience pain during intercourse, but did you know that uterine fibroids could be a contributing factor? Submucosal and intramural fibroids in particular interfere with the normal operation of the uterus, pulling it out of shape and making any contractions or pressure painful. This can cause difficulties during sex, including bleeding if the fibroids are located near the cervix. The imbalance of hormones which fibroids cause can also have a negative effect on a woman’s libido, lowering desire and making intercourse less enjoyable. Sexual symptoms can be especially telling if you have never before had a problem with intercourse, but have recently started to experience a decrease in desire, pain, or bleeding. If you do experience pain or bleeding during intercourse, you should seek out the advice of a doctor right away.

While uterine fibroids can cause many complications in day to day life, some of the most heart breaking happen during pregnancy. While the exterior Subserosal fibroids can have little to no effect on a healthy pregnancy, other types can. Interior submucosal fibroids, if located near the middle of the uterus, can make it hard for the fetus to properly imbed in the uterine lining. If it is a large fibroid with lots of blood vessels, it can also interfere with the proper functioning of the placenta by monopolizing blood flow which should be going to the fetus. A study conducted in 2000 suggested that even smaller fibroids located in close proximity to the placenta could cause an increase in bleeding and early pregnancy loss. The same study noted that among women with subserosal and intramural fibroids, the miscarriage rate was 40% in the first trimester and 17% in the second trimester. Intramural and subserosal fibroids can also cause complications with labor and birth, even after an otherwise healthy pregnancy. In fact, the presence of fibroids is associated with a six times greater risk of cesarean section.

The presence of fibroids can also make it difficult to even become pregnant. The same factors which cause early miscarriage in some women can make it difficult to become or sustain a pregnancy at all. In a small but significant percentage of women, fibroids can even be determined to be the exclusive cause of infertility and repeated miscarriage. It is highly recommended that women seeking treatment for infertility have any existing fibroids addressed before attempting IVF or other assisted conception methods.

The good news is that there are many options available for the treatment of uterine fibroids. If the symptoms above manifest, or begin to effect your quality of life, the fibroids which cause them can be easily and safely addressed. Speak to your doctor about available treatments, including non-surgical options such as uterine fibroid embolization.